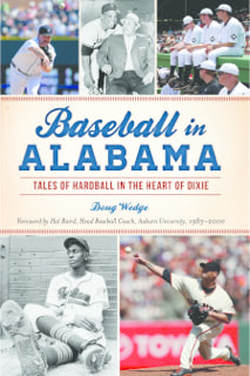 Looking back on Alabama's rich baseball history, Baseball in Alabama:  Tales of Hardball in the Heart of Dixie (The History Press) profiles ten players with Alabama roots, sharing their journey to big league success, career highlights, and good stories.  Learn about Billy Williams barnstorming with Satchel Paige, Bob Veale leading the National League in strikeouts, Tim Hudson propelling the Oakland A's during a record-setting winning streak, and Ron "Papa Jack" Jackson honing Red Sox hitters into champions.  In addition, Hall of Famer Alan Trammell recalls his days striving for the big leagues as a Montgomery Rebel, and alumni from the 1955 Mobile Bears look back on their championship season.

"Doug Wedge has a gift for storytelling. Reading about the impact the state of Alabama has had on the sport of baseball was a trip down memory lane for me — and it will be a nostalgic treat for all other baseball fans as well. From the Willie Mayses and Hank Aarons of decades ago to the modern-day Tim Hudsons and Bo Jacksons, the stories about every player are fascinating. Wedge’s tales about the historic Barons and Black Barons of Birmingham should make every student of baseball history put the annual Rickwood Classic game on his or her bucket list."  Don Logan, owner of the Birmingham Barons 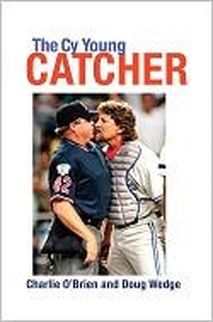 Over a fifteen-year career, catcher Charlie O'Brien caught thirteen pitchers who won the Cy Young Award.  In The Cy Young Catcher (Texas A&M University Press, 2015), he shares what it was like working with all-time great pitchers like Greg Maddux and Roger Clemens and what he did behind the plate and in the clubhouse to push his pitcher's buttons and coax a better performance from him.

"One of the many oddities of baseball, the game in which the action begins with the team on defense holding the ball, is this: The most interesting and most physically and mentally demanding position is in foul territory. Charlie O'Brien, who spent 15 seasons there, gives readers a glimpse of the game from the best seat -- well, crouch -- in the ballpark."   George F. Will, Syndicated Columnist